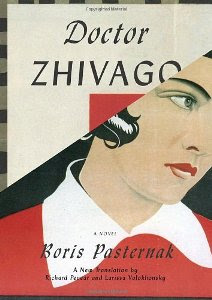 After struggling with most of part one before eventually losing myself towards the end of part one I ventured into Part 2 with slightly higher hopes. Unfortunately I immediately started to struggle again.

What I mainly had trouble with was the lack of dialogue and general dry prose which left me disengaged. However like part one I did find myself eventually becoming submerged in the story and the novel has got some great elements to it.

I truly loved the character of Lara and I think its because she is a more rounded character than in the film, in the book she is much more of a mother figure and is also a more resourceful and practical character as well as being the ‘love interest’. The hardships she suffers, the agony she experiences as she tries to keep her daughter safe and her sad fate I found quite heartbreaking.

I thought the novel demonstrated quite well how family and friends can suddenly become spilt and lost to each-other during wartime and how an individual can suddenly find themselves on the wrong side. Doctor Zhivargo quite often found himself talking to various characters he meets along the way, all of whom have their own tragic story to tell. These minor characters within the prose shone out for me and some of the more memorable tales and images came from these characters.

There were scenes in the novel which I truly enjoyed reading like the train scenes mentioned in Part One and the forest scenes in Part Two. I also enjoyed the scenes between Dr Zhivargo and Lara while they were at Varykino both for the atmosphere and the sudden abundance of dialogue between the pair of them. Unfortunately these wonderful scenes were inter-spaced with the rather laboured prose which at points became a chore to read and left me swinging from hating the novel to then loving it.

Reading Doctor Zhivargo has been a mixed bag for me but overall I am very glad I read it as it was worth it for the parts I loved, the character of Lara and the very moving ending. Even though the host of the read-along at Nonsuch Books did not enjoy it as much as I did, I am very glad that she hosted this and that I participated.