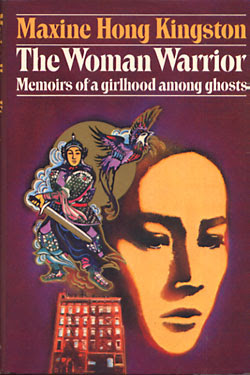 The book is divided into five parts which mostly contain stories about the narrators family life and the cultural differences between her parents (who were born in China) and their children (first generation Americans.)

I did struggle with the first couple of stories in this book and in particular the second chapter which was titled 'The White Tiger'. It took me a while to get used to the narration which seemed to change quite suddenly from the past to the present and I had trouble getting a sense of the characters that were introduced. The White Tiger told the story of a Chinese legend (from reading it I would say this sounded like Mulan but I could be wrong) of a female warrior who takes her fathers place during battle. I struggled with this section of the book and it just seemed out of place within the family stories, I'm afraid I couldn't really see why this chapter was in there but this could be because of ignorance on my part.

The last three stories I loved. Perhaps I had gotten used to the writing style or perhaps its because the stories started to focus on her families experiences as emigrants, but I found the last three chapters flowed and I found them interesting and highly enjoyable. It interested me that the narrator is torn between Chinese culture and the culture that she was born into. Although she is torn between the two cultures, she tries to embrace both which sometimes bring her into conflict with her parents.

While there are some funny moments in the book there are also shocking moments as the narrator relays stories about the treatment of girls in China as told to her by her mother. Her mother is quite a prominent character in most of the stories and her story of how she came to America from China and what life was like back in China is often referred back to throughout.

Would I recommend this? Overall yes. I did not read this book as a overall emigrant experience or as a blueprint for every Chinese-American experience, it also has to be taken into account that this was written more than 30 years ago, but reading it as the authors own personal experiences I found it thought provoking, funny and an enjoyable read.