The Grapes of Wrath by John Steinbeck

The Grapes of Wrath follows a migrant family from the 1930's that are forced to leave the farm they work on in Oklahoma and head for California because of the great depression. On their journey the family realise that tens of thousands of people from all over the southern great plains have also been forced from their homes and the sheer numbers of people are saturating any available jobs in California. Once they do eventually reach California the family finds hostile locals, exploitation, prejudice and starvation.
I have read a few reviews and many people either mention or complain that The Grapes of Wrath will grind you down. I would agree to an extent, the hopelessness of the family’s situation and the endless relentlessness of trying to find work and their next meal after 500 pages can wear a reader down. But this is no bad thing, this really happened to people and it would have left perhaps a bad taste in my mouth if Steinbeck had tried to make this terrible situation somehow more uplifting just to make it more palatable for a lot more readers. While the Grapes of Wrath is very much in parts a social commentary I feel it is a commentary which is relevant today.
Most of the novel is written from the family’s point of view but then Steinbeck will stick in a chapter telling a more overall picture and putting the events into context so in a way the reader becomes more informed than the family on their own hardships and situation.
This is the kind of novel that is worth the read in the end as it is the overall fight for survival rather than the individual characters and events that will stay with you. Brilliantly written and recommended.
Verdict 5/5

Benjamin Franklin: His Life as He Wrote It (Folio Society)

Benjamin Franklin requires no introduction to American readers of this blog, his part in helping to establish the United States of America as an independent nation is very well documented. Here in England Franklin is, sadly, not a historical figure we learn about in school which is why I have decided to read about him as an adult.


To say Franklin was extraordinary is something of an understatement. I don’t have room to list all the things he achieved in his lifetime but he was a noted polymath who was a printer, author, Politician, scientist, ambassador, postmaster, musician, inventor and statesmen. He founded the first lending library in America, created the first Fire Department in the state of Pennsylvania and helped found the first university there too. He was at the centre of talks and negotiations between Britain and America regarding the future of the colonies. Franklin was present at the most pivotal moments in early American history signing both the Declaration of Independence and the United States Constitution
For the most part the book was very interesting. As an autobiography it gives the reader a unique opportunity to get into the mind-set of one of the greatest figures in history and read about his thoughts and feelings however the book is not written or laid out as memoirs per se. For the most part they are a collection of letters written by Franklin to numerous different correspondents, some family others politicians, friends or businessmen. As I didn’t know much about Franklin to begin with the meaning of some of the letters was lost to me. The only thing to assist in putting the letters in context was a short paragraph from the editor explaining the background, sometimes this wasn’t sufficient. I feel reading a biography about Franklin first then moving onto his autobiography would have been more sensible but hindsight is a wonderful thing.

Some of the most interesting aspects of the book were reading about America (these days a political, military and economic powerhouse) as little more than a British colony beset with problems varying from citizen riots to the French threatening to invade. It was surreal reading Benjamin Franklin describing himself as British and the complex, headache-inducing political background for the eventual split from Britain.


If you know your American history well and have learnt about Benjamin Franklin before this would be a very good book to read however if you know little or nothing about him I suggest reading a Biography first then moving onto this.

The Gaol: The Story of Newgate - London's Most Notorious Prison by Kelly Grovier 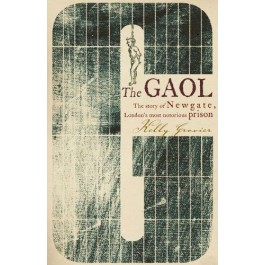 The Gaol is a history of London’s infamous Newgate Prison which operated for over 800 years before finally closing in 1902. Being one of London’s main prisons for so long meant that the place has been long associated with various famous characters, literature and historical events. In this rather short book (its less than 300 pages) the author attempts to tell Newgates story through the stories of some of its more famous and not so famous inmates.
Rather than give a history of Newgate using a chronological time-line, the author instead largely bases each chapter on the various crimes and lives of its inmates. For example one chapter is based on highway robbery and another on those inmates that managed to escape. Writing the book in this way means it can be difficult to get a sense of the period of history the author is referring too as the time frame jumps about but it also means that the individual stories are told giving more of a close-up to the life in Newgate Prison.
Famous inmates include (and believe me there is a big list)  Casanova, Daniel Defoe and William Penn. What I have found already though is how many times Newgate is mentioned in literature. I am currently reading Great Expectations and not only is Newgate mentioned but Pip has a tour of the place (as did Dickens himself). I have also recently finished Star of the Sea by Joseph O’Connell and again Newgate was featured. 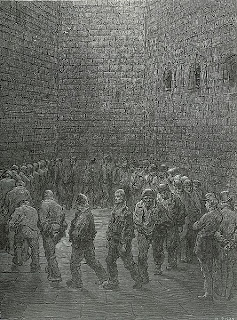 The full history and the changing conditions of Newgate are far too large to mention here but many aspects of the prisoner’s lives, crimes and executions are covered. Given that the government’s policy during the 18th century was to use execution as a means of crime prevention meant that a stay in Newgate was often short and the public executions outside the gates would draw large crowds. Prisoners had to pay for everything making the position of the gaoler a rather lucrative one which was hard to get.

If you want a more detailed history of Newgate then I wouldn’t recommend this book unless you are using it as a starting block but I would recommend it for anyone interested in the subject and is more interested in the prisoner’s lives rather than important dates.
Posted by Jess

Possession: A Romance by A S Byatt

Possession to put it simply is about two modern day academics who investigate a possible previously unknown love story between two well known Victorian poets. The story constantly jumps from between the modern setting to a Victorian love story and is told in the various forms of letters, poems, essays, and straightforward narrative.
Possession is certainly not what you would describe as a light read but the combination of the weaving story-lines and the detective part of the plot kept my interest and I ended up finishing this rather weighty book quicker than anticipated. The poetry I didn’t really give my full attention, in fact I skimmed read them. I just didn’t enjoy the poems very much, perhaps I would have gotten more out of the novel by fully reading the poems but I don’t feel as though my overall enjoyment was too much affected. The love story set in the Victorian era was more convincing than the modern day one but both time-lines in their own way kept me turning the pages.

I do have one minor quibble with the novel which I feel I have to mention. Firstly the ‘villain’ was (I felt) badly drawn. The character was an American collector who had to possess any of the Victorian poet’s memorabilia and he was throughout the novel painted as a two dimensional ‘evil rich American’.  Why not just make this character an avid rich collector? Why make him an evil, prostitute visiting, grave robbing almost cartoonist villain? I half expected him to have an evil chuckle to boot. But this is a very minor quibble; it just bothered me a little.

Overall though this is a novel I thoroughly enjoyed and in which I could immerse myself in. The settings are great as are in particular the Victorian characters and I would recommend this. Being quite a multi-layered novel this would benefit from a second read.

The Filter Bubble: What The Internet Is Hiding From You by Eli Pariser

The Filter Bubble: What The Internet Is Hiding From You is an interesting book. It basically goes into detail on how information is collected via the web from sites such as Google, Amazon and Facebook and what those companies do or intend to do with the collected information. A basic history of various companies like Amazon is given along with details on how they use your search history or purchase history to recommend products/provide search results/advertise etc. etc.
The author states the advantages of this, e.g. when I type in ‘Cubs’ into Google I am very likely to get very different search results to someone living in Chicago typing in ‘Cubs’. But it can also have its disadvantages, e.g. if I click on loads of celebrity related news stories while browsing Google news, it doesn’t mean that I am not interested in serious stuff even if I was to only read the headlines.

As I said it’s interesting stuff, especially for people like me who know very little about how the internet works. Unfortunately the author gives very little information on what an individual can actually do about it. I’m still going to use Facebook and I’m still going to order stuff from Amazon, aside from the usual precautions that I assume most people take anyway (like not giving your address on Facebook) there’s not really any further precautions someone can take (aside from not using the internet at all)

Of course like most books written on something as fast moving as the internet this book will be outdated soon so if you are interested in it then it’s best to pick it up within the next year or so.

Alot of the legislation regarding privacy stated in the book refers only to American law and this coupled with the fact that companies such as netflick (is that it?) are mentioned I’m not sure if a non-American would get the most out of this one.