Travels with a Donkey in the Cevennes by Robert Louis Stevenson

I really enjoy travel books and this is the oldest I've read so far. First published in 1879 Travels with a Donkey in the Cevennes chronicles a twelve day hiking journey taken by Robert Louis Stevenson when he was in his twenties. The book is brilliant and very easy to read despite its age.

Stevenson had been sickly for much of his early life and craved adventure now he was well enough to travel. He took the trip on his own with nothing for company but a stubborn donkey he purchased to carry his equipment. The Cevennes region was very poor at that time and had seen a lot of religious upheaval in the past often resulting in violence. Because of his he went armed with a revolver, though thankfully he never had cause to use it.

He writes with old world charm and honesty which I found refreshing. The simplicity of the book and the journey added to the appeal. The colourful characters he met were great to read about and there were some very funny moments. He paints a vivid picture of the rugged landscape and the conditions he lived in.

Stevenson was obviously a fluent French speaker and conversed with the locals in their own language. As a result he would sometimes write segments of conversation in French which, unfortunately, were not translated for the benefit of those who don't understand French. This is more a criticism of the publishers rather than Stevenson himself. This is a very minor criticism and it certainly doesn't reduce enjoyment of the book especially as it doesn't happen all that often.

For those readers who are very fond of animals I feel it is fair to mention that Stevenson sometimes resorted to beating the donkey to get it to do his bidding. Whereas I agree that beating an animal is wrong, if you bare in mind the period this was written in then you will understand his actions were not at all unusual for that period.

Miss Pettigrew Lives for a Day by Winifred Watson 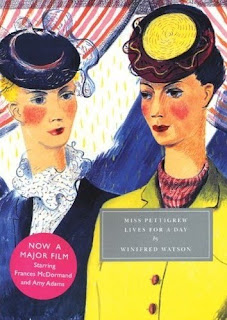 Normally I quite like my literature to be full of doom and gloom. Give me a novel filled with hardships, tragedy and war and I’m as happy as a clam. Does this make me weird? I promise I don’t have any “issues” and I don’t like misery memoirs at least.
This book is filled with none of those things. This book would instead be described as delightful, charming and feel good. There are even lovely picture drawings throughout the Persephone edition making it even more lovely.

But heck I loved it. I got caught up as Miss Pettigrew got swept away into the life for one day and night of the beautiful Miss La Fosse. It was lovely for once to read something that was pure escapism with a happy ending, but more than that it was actually a great page turner.

The below is a trailer for the film (useful if you want more of synopsis) and I wondered if anyone had seen it? It looks perfect for a cosy night in on my own with a box of chocolates.

OK first off spy thrillers are not my usual genre. I tend to find them far fetched and not all that thrilling, the only reason I read this is because I am making my way through the Penguin decades classics.

After saying that it is Bond, James Bond. I was curious to read a novel to see if the films are any different and to see how well James Bond has translated to the screen.

From Russia with Love has quite a simple straight-forward plot. The Russian secret service department S.M.E.R.S.H devise a scheme to increase their reputation and decide to assassinate Bond. The first third of the book is set in the USSR and follows the development of the plot and the various villains involved. All the characters introduced are given huge back stories which include their early life, motivations and how they came to be part of the service. This makes for some quite interesting reading and for me was the best part of the book.

Unfortunately (and I can’t believe I’m able to say this) the book takes a slight downturn when Bond is finally introduced in chapter 11. Yep Bond almost ruins his own story ;)

Let me elaborate. In the first few chapters the reader is introduced to 'Red' Grant, an Irish born psychopath and murderer who started out killing animals as a child before moving onto local girls then somehow winding up as the top executioner for S.M.E.R.S.H. Then there is the beautiful but naive MGB Corporal Tatiana Romanova (note the surname), who one day is hauled into the leader of S.M.E.R.S.H's office, questioned on her previous sexual experiences before being told that she is leaving Russia to seduce a man she has never met (although she did hit the jackpot seeing as that man is Bond)

These are interesting stories and characters so imagine what its like to then move from the USSR to London to find Bond living a somewhat boring life being looked after his elderly housekeeper while he broods about his latest lost love. I’m sorry but I would much rather read about the villains than how reliable Bond’s housekeeper is or how long he likes his eggs boiled for! (Three and a three quarter minutes in case you are interested) Bond’s contact in Istanbul has more of a sex life FGS.

Obviously From Russia with Love is part of a long series of books so perhaps something happened to Bond previously which made him into abit of a bore here but boring he was.

Despite that it was still a very entertaining book with the usual fights, far-fetched plot lines and the villain spending a good half an hour telling the entire plan to Bond before getting around to trying kill him. It was fun and at one point even a copy of War & Peace saved Bond's life (I did mention far-fetched already)

Verdict – fun but I prefer the films. Unsure if that's because of the Daniel Craig factor though.

A Moveable Feast by Ernest Hemingway

I visited Paris about four years ago, at the time I was not a fan of Hemingway so I missed all of the parts of the city which he was known to have visited and wrote about. This is something I regret and will most certainly remedy one day.

Hemingway clearly loved Paris, this is evident on almost every page. For the benefit of those who don't know anything about his life he spent years living in Paris in the early 1920s with other famous American ex-pats of the 'Lost Generation' such as F. Scott and Zelda Fitzgerald, Ezra Pound, Gertrude Stein and others. A Moveable Feast was the last book he wrote before he died making it an emotional read for fans of his work.

Hemingway writes in his trademark style which is always stark and honest whilst injecting infectious passion and enthusiasm which can be easy to miss if you don't look for it. His escapades whilst in Paris make interesting, entertaining and funny reading but also sad and tragic. A Moveable Feast gives a better insight into who he was more than any of his other books which I found fascinating. He honestly reflects on his own faults which is very unusual for him and admits he sometimes had trouble controlling his temper.

The book is advertised as fiction which mystifies me as it is clearly autobiographical. Hemingway uses everyone's real names, including his own. When relating stories he will occasionally state he can't remember exactly which café something happened in or which person he was with at the time. And he is known to have frequented the places he talks about and socialised with the people he writes about. How can this be fiction? Who knows.

This is truly a book worth reading and is my favourite Hemingway work to date, I thoroughly recommend it 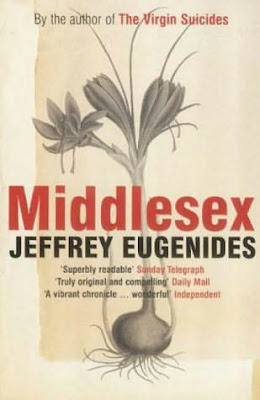 I think most people know the plot for this by now, the narrator Cal is a hermaphrodite. Cal is genetically a male hermaphrodite who is raised a girl and doesn't realise his gender until he hits puberty.

However the first half of the book is basically your standard family saga novel which covers three generations of the Stephanides family. All kinds of historical events are thrown in along the journey of Cal's grandparents incestuous love, the emigration from their homeland in Greece to America, to the family making their home in Detroit.

There is nothing wrong with the first half of the book but I have in my time read my fair share of family saga novels and unfortunately this one didn't stand out to me. The scenes and the situations throughout were vivid and although the writing demands your full attention the events which unfurl hold your interest. There was nothing wrong with it but I wanted to start reading about Cal's present not all the family stuff that read like a lot of other family saga book.

Once the story shifts to Cal and it suddenly becomes quite gripping and I began to care much more about the characters. Cal struggles to come to terms with her identity at times of radical changes. It's not only about being genetically different, but also about Cal's journey to fit in while carving his own individual path and finding Cal's true-self.

While in many way this is an entertaining read and there were large parts I enjoyed, I was left wanting to read more of Cal's life than the novel ultimately gave me. Overall I ended up feeling slightly disappointed.