In where I attempt to catch up on everything

I am way way behind on reviews at the moment, life seems to be ticking along quite nicely so perhaps I’m just being lazy but I have also been up to all sorts.


Instead of writing any sort of review I thought I would inject some personality into this blog and talk about what we’ve been up to over the past couple of months. Believe it or not we do have other interests and we don’t just spend all our time just sitting around reading (although that does sound like bliss)


Alas however I have just realised how bad I am at taking pictures, I mean I take my camera everywhere but I don’t seem to take pictures of anything. We went into London a couple of weeks ago and visited the British Library and the Charles Dickens House before it closed for refurbishment. I took one photo the entire day and it was a picture of this Umbrella and walking stick shop.

Admittedly it does look like somewhere a Charles Dickens character would shop but still.

Then my sister came down  from Bristol to visit the family and we took her to Hampton Court. Hampton Court is somewhere we go quite often as our son loves it, the staff are friendly and they have really good facilities for children. Cue lots of photos of my son dressed in a tunic and jester hat but none of the building or beautiful grounds itself.

But we did before all that go to Wales which was a holiday funded entirely by our sold ebay items. We decided we wanted a small holiday in the UK but we had but money due to various expenses so we decluttered and sold everything on ebay to see how much we could get. Over fifty posted items later (which included empty perfume bottles and an empty phone box (!) we were off to Wales. I hadn’t been to Wales since I was a kid and Chris has never been unless you count a brief visit to Hay-on-Wye. I did take a fair number of pictures and we loved the place. It was less rural that the parts of Wales I visited as a kid but we were really impressed with how they developed Cardiff. There was loads of stuff to do for both adults and children so we will most definitely be going back. 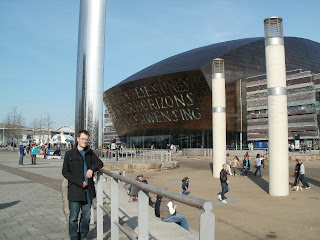 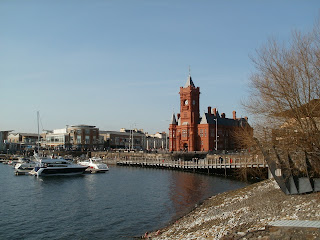 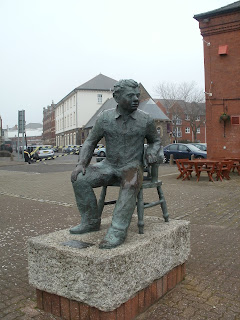 Thats a statue of Dylan Thomas in case you were wondering

In other news I will be a ‘Surrey ambassador’ for the Olympics. We are not in London but the road cycling will be taking place just down the road from us and the torch will also be passing through our town. I’m not 100% sure what a Surrey ambassador actually has to do but I do have to attend a training day in a couple of months so I guess everything will become clear then. Whatever I have to do though I am sure it involves wearing a bright yellow jacket.
Next month we will be heading up to Edinburgh for the running festival they are organising. We will be mostly supporting my brother who will be completing his first Marathon but I am also taking part in the 10k. I have done zero training for this so I really REALLY need to kick myself in the butt so training will take up a fair amount of my time before then.


So there we go, tomorrow I’ll pop up a quick post on my reading at the moment and reply to comments (sorry I have been really bad there)