Olympic torch and the next couple of weeks

In a few hours 70 sheep, 12 horses, 10 chickens and nine geese will participate in the London 2012 opening ceremony  and two weeks of madness will begin. My husband’s day job is in the emergency services so whether we like it or not, plus given our close proximity to the action means we are affected by the Olympics. Chris has been given something ridiculous like three days off over the period which is why this blog has been rather neglected of late. But it’s not all bad; his job means that for a few of the events he gets the best views of some of the events. 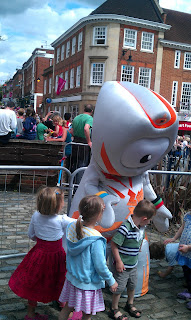 For those of you who don’t know, over the past year the Olympic venues have been put through their paces by holding a large number of ‘test events’ in order to test the venues themselves and to spot any potential problems that can be fixed in time for the Olympics. My area Surrey is hosting the men and female road cycling events and during the test event a number of small problems arose including a lack of friendly face for the many visitors. The policeman and the Stewarts on the day were bombarded with questions ranging from ‘where’s the best place to stand’ to ‘what time are they coming through this area’ and while the policeman and stewards were very good, the policeman do have a job to do and the stewards were not from the local area and could therefore their help was limited. Given that way more people will be descending on the area during the Olympics the role of the ‘Surrey Ambassadors’ was created. 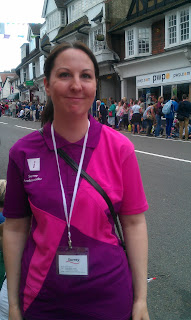 So I’ll be there I a few days, giving out information leaflets, answering questions (there are a large number of Ambassadors that speak a foreign language) and basically giving visitors the impression that we are all very nice really. Unfortunately although the uniform is certainly distinctive, it does resemble a jockey’s jumper somewhat but hey at least we get to keep it. 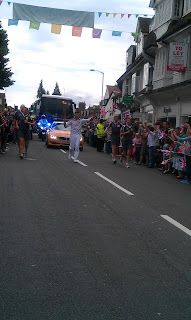 The torch was a practice event for the ambassador system which it was a success and great fun. It’s amazing how many people turned up and how busy it was. Even Chris who was working is beginning to get into the spirit slowly but surely.
Normal service will be resolved in a couple of weeks but in the meantime I may blather more about the Olympics as I do have tickets. 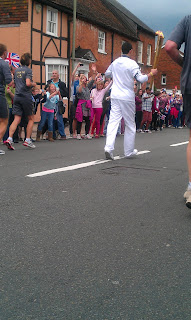