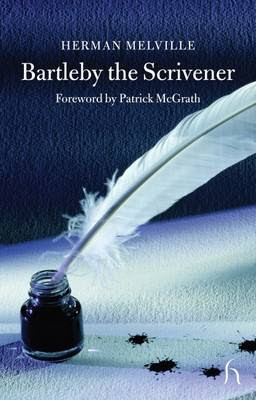 Bartleby is an attempt of mine to read more short stories, I often complain that I 'don't like them' but I'm really beginning to see that I just hadn't read that many great ones. Despite Bartleby being written in the long winded heavy prose that Melville writes in, this has to be one of my favourite short stories.

Bartleby is hired by a lawyer (who narrates the story) to work as a scrivener the lawyers office along with the two existing scriveners. Bartlebys job is to hand-copy documents (in the days before photocopiers) sometimes over and over. One day when Bartleby is asked by his boss to do something, he replies 'I prefer not too' and he goes onto repeat this phase every-time he is required to do anything causing ciaos in the office.

This story had me feeling quite a few emotions over the course of its 40 or so pages. At first I felt the frustration of the lawyer as he deals with a man who will not leave this office (even at night or the weekend) and refuses to do anything apart from stare out the window. I mean what would you do if a co-worker did this? because the phrase 'I prefer not too' is not technically an outright refusal.

Of course the most obvious answer would be of course to sack him which the lawyer attempts to do only to be confronted by the hilarious reply 'I would prefer not to quit you'. It was at this point I began to find the whole thing quite funny and I laughed when Bartleby uttered his phase as his boss grew more and more frustrated. I also found it funny when the narrator at a complete loss decides to move his office just so that he does not have to face Bartleby again.

Towards the end however the story took on a more darker turn and when the story ended I felt sad about its inevitable ending, but it also had me thinking about what it all meant. After pondering it for a few weeks I have come to my own conclusions but have also realised compassion and responsibly are major themes and that the story is as much about the narrator as it is Bartleby. The narrator attempts to understand and help Bartleby and shows humanity towards him when a lot of other people would have walked away, but of course there is only so much one human being can do for another and unfortunately the narrator reaches that limit.

I also personally see it as a tale of how soul destroying working in an office can be (or to put it more intellectually and essay like; a story of corporate discontentment and how this environment affects the human condition). The office where the story takes place is small and the windows look out onto a sheer brick-wall which is what Bartleby stares at all day long. The work Bartleby does at the beginning is monotonous, he is not fully engaging his brain but instead doing the same repetitive task until one day he stops. Even at the end of the story when Bartleby has the opportunity to look at more of a view, he instead would rather stand inches away staring at a wall. The narrator also concludes at the end that Bartlebys condition was either caused or exasperated by his previous employment working at the dead letter office.

Would I recommend this? I warn you that its written in Melville's normal style which can be heavy going, but I found this story funny, sad and incredibility thought provoking.

Now for the bad news; I have given up at last on Moby Dick. I tried, I really did try, I read 300 pages and even though I had come so far with it I honestly don't think I could stand to read the last 200 pages. When an animal lover like me would quite happily see that dam whale carved up in front of me just so my misery could end, I knew it was time to put it down.